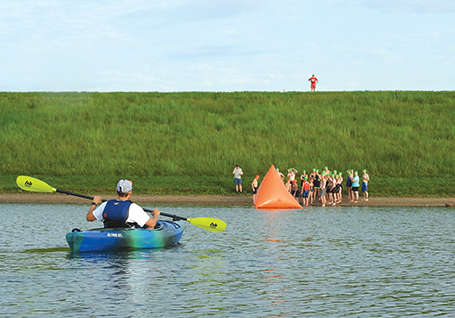 The Cornhusker State Games, held annually the 3rd and 4th weekends in July, is one of the nation’s largest multi-sport athletic festivals. In 2018, some 10,756 Nebraskans participated at more than 50 different venues, primarily in Lincoln and the surrounding area.

Executive Director Dave Mlnarik touts its variety and vibe as key components in the success of an event that grew from 19 sports and 3,000 athletes when it began in 1985. The most recent edition included three debut sports: Freestyle BMX, Ninja Warrior Events and Rowing.

“It is hard to think of another event or occasion that brings together so many people of different ages, abilities, ethnicities and hometowns. We have sports ranging from traditional Olympic favorites like swimming and track and field to off-the-beaten-path activities like sport skydiving, disc golf and foosball,” Mlnarik said.

An Olympic-style Opening Ceremonies—complete with a parade of athletes, skydivers, fireworks and a torch-lighting ceremony featuring a mystery sports celebrity—adds entertainment value and facilitates camaraderie across the age, geography and sport-preference spectrum. But once the torch is lit, the athletes ardently pursue the podium and a shot at one of the 3,500 gold, silver and bronze medals awarded.

To further accomplish that mission, the Council started a new five-sport Corporate Games last April, with 12 companies fielding coed teams of employees in five different sports. The debut event was successful enough to encourage future expansion. Mlnarik said a bi-product of the new event is that the Corporate Games give Lincoln employers another reason to call Lincoln a great place to work.

“The Corporate Games give Lincoln companies another healthy-culture perk to use as a recruiting and retention tool as they strive to compete for top talent and keep homegrown workers in Nebraska,” Mlnarik said.

Other events conducted by the Nebraska Sports Council include a Mud Run, in late August at the Lancaster Event Center and the youth-only one-mile Pumpkin Run—the largest youth cross country run in the nation, with more than 3,000 pre-school and elementary runners annually.

The Pumpkin Run is heavily promoted by P.E. teachers in Lincoln’s schools, many of whom use the event as motivation for kids to develop the fitness and confidence to run a mile without stopping.

“The positive impact of the Pumpkin Run on our students’ lifelong health is tremendous if immeasurable,” Mlnarik said, adding “these kids will always have this experience to fall back on when they search for motivation to exercise later in life.”

As Nebraska Sports Council events and programs boost wellness in the state, they also provide an annual economic impact of more than $7 million on the state’s economy, which is undoubtedly why the 501(c)(3) non-profit organization is able to attract sponsorship funding to cover its operational costs.

Mlnarik said he’s grateful for a generous business community and a loyal volunteer base, both crucial to the success of the Cornhusker State Games.  And to those considering participating for the first time, he promises, “you’ll thank me if you do!”