Memorials and City Spaces Made Possible by Generous Donors 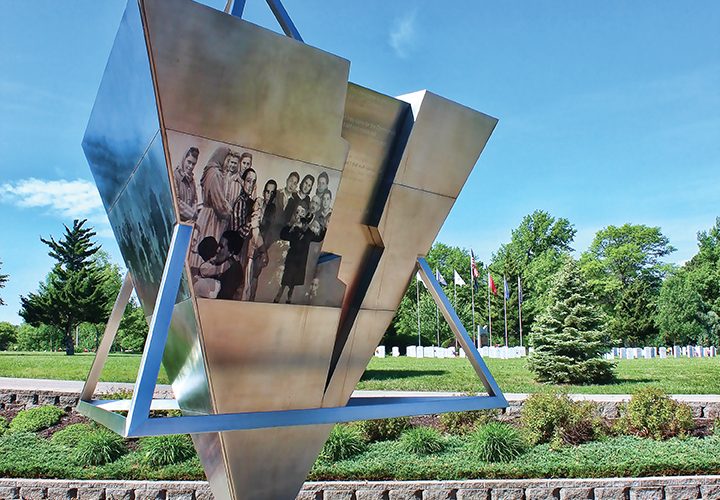 Visitors to Lincoln are fortunate to have places to visit and enjoy their time here, thanks to the generosity of people who have made Lincoln their home. Because of gifts made to—and through—the Lincoln Community Foundation, memorials, monuments, green parks and city spaces are fine features of our great city.

Tower Square is a public plaza that serves as a gathering and events space. International artist Jun Kaneko, who resides in Omaha, designed the entire park and Ascent, the stunning art glass tower. Since its Dedication in December 2014, Tower Square has been used to gather, celebrate, pay vigil and peacefully demonstrate.

Traveling slowly through Wyuka Cemetery’s winding roads (3600 O Street), visitors will come across a giant triangular sculpture tucked into the northeast corner of the all-faith cemetery. The striking, silver monument is dedicated to the memory of those who perished in the Holocaust and in honor of all the liberators and survivors of the Nazi concentration camps. The Nebraska Holocaust Memorial was created through the support of thoughtful Nebraska citizens with the intent to remember and educate on lessons of history.

Lincoln Community Foundation is home to the Sam and Frances Fried Holocaust Memorial Maintenance Fund which helps to preserve the memorial. Dedicated in 2007, the memorial receives no state funds. Individuals can support the ongoing educational improvements by donating $100 toward personalized bricks.

The memorial is considered one of Lincoln’s top 50 attractions by TripAdvisor.com.

The Gold Star Families Memorial monument was a gift of $150,000 from the Lincoln Community Foundation to Nebraska in its Sesquicentennial year (2017), honoring all families who have lost loved ones in the U.S. Armed Forces in the past 150 years. Located in Antelope Park near the Veterans Memorial Gardens off of A Street, the monument was the vision of Hershel “Woody” Williams, the last living medal of honor recipient from the battle at Iwo Jima. His foundation’s mission is to have a Gold Star Families Memorial Monument in every state. The Nebraska monument was the 23rd dedicated.

Union Plaza is an outdoor oasis in the heart of the city, located in a three-block area between 21st and 22nd, O to R streets.

Jump on a BikeLNK bike and take it for a ride down Billy Wolff Trail through Union Plaza, enjoying the native plants along the way or catch an outdoor concert at the amphitheater. The amphitheater was made possible by Lincoln Community Foundation on behalf of the Sheila Dickinson Dinsmore Graf Fund.